Wonder even in Suffering, A Christmas Meditation 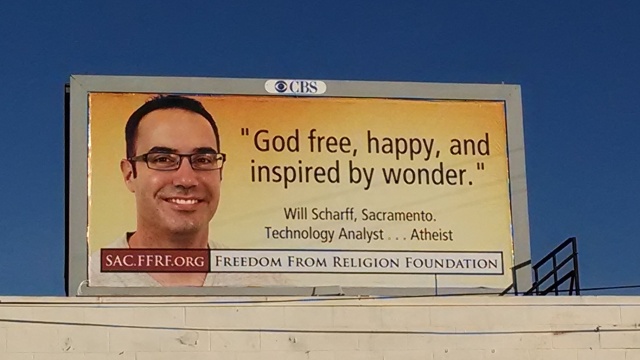 Christmas must be a strange season for atheists. It’s always this time of year that they choose to spend their money with their massive billboard campaign. These billboards don’t come cheap and I would guess the competition this time of year for that space is high. I imagine they dig deep this time of year because they imagine folks who don’t attend church much darken the door and fall under the spell of preachers like me.

Doubts about the Character of the God of the Bible

It would seem to me that the happy atheist campaign is considerably less effective than going negative on Christianity. This tact I think has gotten a great deal more traction of late.

The God of the Old Testament is arguably the most unpleasant character in all fiction: jealous and proud of it; a petty, unjust, unforgiving control-freak; a vindictive, bloodthirsty ethnic cleanser; a misogynistic, homophobic, racist, infanticidal, genocidal, filicidal, pestilential, megalomaniacal, sadomasochistic, capriciously malevolent bully.” –Richard Dawkins, The God Delusion

Allan Bevere on Jesus Creed makes this observation about this tactic:

The sentiments above have gained much traction with people and it is understandable why more than a few, and not exclusive to atheists, have drawn such conclusions about the God of the Bible. It has long been noticed that the Old Testament is quite violent in many places, and there’s a whole lot of sexual escapades taking place as well that do not fit the traditional “biblical” understanding, of sex, so to speak, even among the people God has called. Indeed, at certain places in the biblical narrative, there is so much sex and violence one gets confused on who’s doing what with whom and who’s gruesomely spilling the blood of someone else.

The problem with so many of these difficult stories in Scripture is not the human element. History reveals all too clearly the demons that dwell within us. The issue, as pointed out in the Dawkins’ quote above, is that God seems to be all too implicated in this bad behavior; and the biblical text clearly indicates that. How one understands the conquest narrative in Joshua and the attempted genocide of the Canaanites, for example, is indeed difficult and complex. But the problem with the blanket dismissal of the God who is involved in these events as some kind of blood-thirsty tyrant ignores the long and complicated story of how God has chosen to act in the mess of human history, and in particular, the mess of Israel’s history in order that the world might be redeemed.

This assault on loyalty to church and traditional Christianity seems to me to be getting the most traction. These observations have lessened the credibility of the Bible and the church for many people.

I think the reason that the Freedom from Religion people don’t lead with this on their billboard is because this tact doesn’t really make people less religious, just less Christian.

Ross Douthat, opinion columnist for the New York Times in his Christmas piece this year noted that when people see a manger scene in a front yard or a mall three groups of people receive three different messages.

Some atheists are of course peeved at the intrusion of religion into the public space, troubled enough to dig deep for their own brand of anti-religious expression.

Other atheists I’m sure don’t mind so much. They know that the roots of our current Christmas celebration at the end of December have roots older than Jesus’ birth in Roman Saturnalia and the winter solstice.

Many others, not to the liking of the freedom FROM religion camp interpret the Christmas story as a spiritual story among many good spiritual stories. It’s a story of God expressing himself in Jesus to give us wisdom and morality. God sends us Jesus because he wants us to be happy, to feel good about ourselves and to be nice and kind to each other. The not nice parts of the story can be ignored or dismissed as pre-enlightened baggage that should be disposed of with other old ideas that science and culture have discovered to be obsolete. We welcome baby Jesus (for some, ESPECIALLY baby Jesus) for the way he helps us all (except those angry atheists) feel good and be good.

Many Christians I think understand Christmas as not much more than the preliminary to the crucifixion. “How could Jesus die to rescue us from hell if he wasn’t born?” Divine Jesus kind of holds his breath and closes his eyes through his 33 years until he can get back to heaven where he belongs.

Books about trips to heaven are popular today and most of them depict heaven as an absolutely incredible place. Those who didn’t get to stay but had to return to this world seem to be universally unhappy about it.

This version of Christianity is always a bit light on the resurrection.

Lo He Abhors Not the Virgin’s Womb

Christmas songs tend to have both the best and the worst theology. The second verse of “Oh Come All Ye Faithful”  declares that Jesus does not abhor the Mary’s womb. He isn’t playing hopscotch holding his nose. He has left glory and come to be with us, to laugh with those who laugh and to weep with those who weep.

What most other takes on Christmas short change is God’s commitment to be with us in all of the mess, confusion and muddle of this world, not just not for community, but for redemption.

The thought of God being born between urine and feces disturbs many.

God of the Old Testament Born Into the New

Alan Bevere goes on to make this point about the current drop of atheist critics.

In other words, Dawkins and Hitchens offer a simplistic view of God and a simplistic view of Scripture. In their thinking, if God is a perfect and holy being, then God must remain above the human fray and make things right without soiling himself in human affairs; and if he does muddy himself in the mire of the human, it’s proof he is no better than his dysfunctional creatures. Indeed, a perfect God would not allow such imperfections in the first place.

But that is not the biblical image of God given to us in either Testament, and I for one am thankful. In affirming the active presence of Israel’s God on behalf of his people and for the sake of the world, we worship a God who (to say it colloquially) is not afraid or adverse to dive into the blood and tears of this world and get human on him.*

The holiday season can be a time where people give simplistic answers to unsolvable sufferings. It is a time of year when people feel most lonely, most alienated, most abandoned.

What we should take from this story of the incarnation is that God comes to be with us in our mess and won’t abandon us or let us go. God isn’t afraid to get human on him. He abhors not a womb full of blood and afterbirth.

While people around you paint pictures of escapist fantasies with blue skies and picked up rooms, and you know there is no easy way to clean up the messes in and around you, this determined God who hangs in there for the long haul with broken heroes, rebellious nations and all the grim process of planet earth will also not let you go.

Colossians 1 reminds us who this baby is.

15He is the image of the invisible God, the firstborn over all creation,

18He is the head of the body, the church, as well as the beginning, the firstborn from among the dead, so that he himself may become first in all things.

20and through him to reconcile all things to himself by making peace through the blood of his cross—through him, whether things on earth or things in heaven.

I can appreciate that my atheist friend on the bulletin board over Freeport Blvd. likes wonder. God is an amazing creator and whether we just witness the universe as laypersons or if we explore it as scientists the wonder seems to just keep going.

At the same time I know this world and as a pastor I know how hard and painful it can be. Wonder yes, pain yes. Both. Wonder may give him a sense of meaning, but pain often feels meaningless and according to the atheist story suffering has no purpose and can only be treated by death which equals annihilation.

Christmas wonder is one of the love of a God who will not abandon us, but instead comes to rescue us from the outside in. He becomes flesh, so that we might learn that flesh doesn’t end in dust but is renewed in resurrection. This wonder inspires me not only when confronting beauty, but also pain.

1 Response to Wonder even in Suffering, A Christmas Meditation