General George Marshall, The Road To Character, Chapter 5, Institutions (like the CRC) in Times of Change 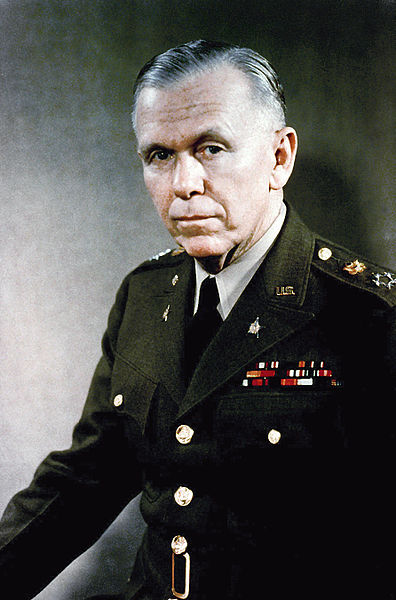 As a boy I was a World War II buff. I read histories, watched “The World at War”, was fascinated by all things WWII.

I knew George Marshall’s name, knew he was central to the US war effort, but knew very little about the man. If you had asked me who the most important generals for the US were in the war I would have quickly named Eisenhower, Patton, MacArthur and Bradley. If you had mentioned Marshall I’d have thought of “The Marshall Plan” for the reconstruction of war torn Europe. Beyond that I knew nothing.

This is part of why I’m enjoying Brook’s book. I like history and biography and this gives you a sample. In a different forum discussing this book I likened it to a box of chocolates. Brooks gives us a sampler of biographies with an eye to character and in this box Marshall is “the institutional man”.

A Man of His Time

Brooks shows Marshall to embody some of the chief values of his generation. Putting himself last and the project of his institution, in this case army and country first. He was first a foremost “a company man” if your country and army are your company.

He sublimated his ego: “The less you agree with the policies of your superiors, the more energy you must direct to their accomplishment.” Biographers have scoured his life, and the most striking feature is what they don’t find— any moment of clear moral failure. He made many poor decisions, but there is no clear moment when he committed adultery, betrayed his friends, told an egregious lie, or let himself and others down.

Marshall still did not excel academically at VMI. But he excelled at drilling, neatness, organization, precision, self-control, and leadership. He mastered the aesthetic of discipline, having the correct posture, erect carriage, crisp salute, direct gaze, well-pressed clothing, and the way of carrying the body that is an outward manifestation of inner self-control…

The point of all this was to separate instant emotion from action, to reduce the power of temporary feelings. A person might feel fear, but he would not act on it. A person might desire sweets, but would be able to repress the urge to eat them. The stoic ideal holds that an emotion should be distrusted more often than trusted. Emotion robs you of agency, so distrust desire. Distrust anger, and even sadness and grief. Regard these things as one might regard fire: useful when tightly controlled, but a ravaging force when left unchecked. People in this mold try to control emotion with the constant firebreaks of decorum.

Marshall embodied this. It made him reliable, predicable, exactly the kind of person his superiors, whether they be President Roosevelt or Congress depended on to give them the truth, to do what he was ordered, and to fulfill his duties not matter the personal cost. The country and the war effort needed him.

Brooks notes that these virtues are out of fashion. In fact many of these virtues are subject to not only distrust today but mockery. The assumption is that institutions are hiding things and so institutional men are dupes, liars and sycophants always sucking up and kicking down.  Marshall was nothing of the kind. He was straight as an arrow as far as anyone knew and now years after his death no one seems to say otherwise.

The CRC as Institution and Pastors as Company Men

I could very easily understand this chapter because this ethos has lived long in the Christian Reformed Church. Many many pastors in the CRC are “company men” and live out this ethos. While the ethos has been eroding here too I always feel it when I go to Synod or Classis. These are things we do together. This is an institution that matters deeply to us. This is something we dearly want to preserve and we try to takes its rules and traditions seriously. While this ethos is often despised or decried there is a strength and beauty to it that I understand and value.

As in the other chapters Brooks is helpful with dispensing some wisdom here.

Today, it is unusual to meet someone with an institutional mindset. We live in an age of institutional anxiety, when people are prone to distrust large organizations. This is partly because we’ve seen the failure of these institutions and partly because in the era of the Big Me, we put the individual first. We tend to prize the freedom to navigate as we wish, to run our lives as we choose, and never to submerge our own individual identities in conformity to some bureaucracy or organization. We tend to assume that the purpose is to lead the richest and fullest individual life, jumping from one organization to the next as it suits our needs. Meaning is found in these acts of self-creation, in the things we make and contribute to, in our endless choices.

Nobody wants to be an Organization Man. We like start-ups, disruptors, and rebels. There’s less prestige accorded to those who tend to the perpetual reform and repair of institutions. Young people are raised to think that big problems can be solved by a swarm of small, networked NGOs and social entrepreneurs. Big hierarchical organizations are dinosaurs.

This mentality has contributed to institutional decay. As the editor Tina Brown has put it, if everybody is told to think outside the box, you’ve got to expect that the boxes themselves will begin to deteriorate.

People who possess an institutional mindset, as Marshall did, have a very different mentality, which begins with a different historical consciousness. In this mindset, the primary reality is society, which is a collection of institutions that have existed over time and transcend generations. A person is not born into an open field and a blank social slate. A person is born into a collection of permanent institutions, including the army, the priesthood, the fields of science, or any of the professions, like being a farmer, a builder, a cop, or a professor.

Life is not like navigating through an open field. It is committing oneself to a few of the institutions that were embedded on the ground before you were born and will be here after you die. It is accepting the gifts of the dead, taking on the responsibility of preserving and improving an institution and then transmitting that institution, better, on to the next generation.

To me this is good stuff. This is helpful. It helps me understand myself, my tradition and my community.

It also highlights how difficult it is to navigate institutions during times of change. Change forces institutions to examine what is core to their being and their culture and what is secondary. We never get this mix right and so we are always reaching back to things we discarded before only later realizing that it is through time that we learn and grow in wisdom.

Giving Your Life for your Institution

Brooks noted that Marshall was never a workaholic. Workaholism is usually a smear made against “company men (or women)”. Workaholism is in fact a corruption of the deep understanding of the value of institutions. Institutions are about what we can do together, in a community that is not only contemporary but also travels through time together. Workaholism is a symptom of faithlessness, that my individual efforts are finally what matters.

Devoting oneself to an institution even for a lifetime is about recognizing that human accomplishment is ultimately more about community than individual achievement. As I was reading this chapter I often compared Marshall to Steve Jobs as seen through the Isaacson biography. Jobs was about building an institution, but there was something idolatrous about it, something that lacked boundaries and was filled with ego. Institutions are never supposed to be about me, they are supposed to be about us and the mission. The “me” is unimportant.

If a thread is developing in this book it is really about vocation. In Marshall’s case vocation had everything to do with institution. It does for many of us in the CRC. We know that there is a world outside of the CRC but for many of us this is the place where we can make a contribution to the world, doing so with our temporal peers, and doing so with those who came before.

Think of this when you go to church and see that man or woman who is there every week, who gives faithfully, who serves continuously, whose picture will never be placed on a wall in the building and whose name may be forgotten but who loves their God and loves this world through institutions.

Os Guiness noted “Without individuals, nothing happens; without institutions, nothing survives.” We should thank God for those who build them and keep them. They are gifts from God.

Husband, Father of 5, Pastor
View all posts by PaulVK →
This entry was posted in book review, CRC and tagged David Brooks, The Road to Character. Bookmark the permalink.

2 Responses to General George Marshall, The Road To Character, Chapter 5, Institutions (like the CRC) in Times of Change