The Road to Character, Chapter 3, The Eisenhowers plus Sin and Moderation 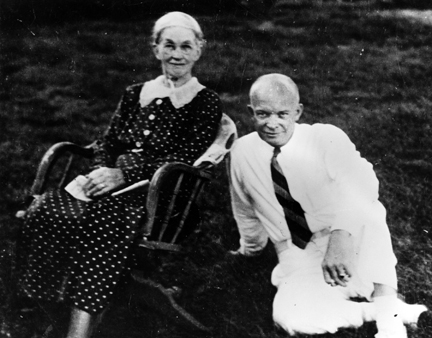 One Halloween evening, when he was about ten, Eisenhower’s older brothers received permission to go out trick-or-treating, a more adventurous activity in those days than it is now. Ike wanted to go with them, but his parents told him he was too young. He pleaded with them, watched his brothers go, and then became engulfed by uncontrolled rage. He turned red. His hair bristled. Weeping and screaming, he rushed out into the front yard and began pounding his fists against the trunk of an apple tree, scraping the skin off and leaving his hands bloody and torn.

His father shook him, lashed him with a hickory switch, and sent him up to bed. About an hour later, with Ike sobbing into his pillow, his mother came up and sat silently rocking in the chair next to his bed. Eventually she quoted a verse from the Bible: “He that conquereth his own soul is greater than he who taketh a city.”

In Chapter 3 Brooks uses the story of Dwight Eisenhower and his mother Ida to illustrate the value of self-conquest. Ike had a temper and everyone knew it, but he was raised in a culture of self-control, not self-indulgence or self-expression. It was Eisenhower’s mastery of duplicity that allowed him to become an effective military leader and an effective president of the United States. He was not authentic. His duplicity was a skill he had cultivated throughout his life and it was crucial for his ability to shape the world even for good.

Brooks shows himself in this chapter to be a conservative, to value the passing culture at the expense and to the derision of the present one. He gives us a nice brief biography of both Dwight Eisenhower and his mother and shows how the values of the passing world served.

Adams I and II in Ike

If you recall a central theme of Brooks’ project is to trace the path, virtues and qualities of Adam I and Adam II. This chapter nicely illustrates how the two Adams are deeply intertwined and at the same time in tension. It is difficult to see which in Eisenhower one should really value. Ike’s cultivated in-authenticity allowed Adam I to succeed and prevail. He could passionlessly dismiss a lover and at the end of his life left his family believing he was unknowable.

Ike’s double nature could make it hard for people to really know him. “I don’t envy you trying to figure Dad out,” John Eisenhower told the biographer Evan Thomas. “I can’t figure him out.” After his death, his widow, Mamie, was asked whether she had really known her husband. “I’m not sure anyone did,” she replied. But self-repression helped Eisenhower to control his natural desires and to fulfill the tasks assigned to him, both by his military superiors and by history.

Brooks begins the book lauding the eulogy virtues, but this chapter illustrates how we are not ready or eager to throw away the virtues of Adam I.

Not only is Brooks a conservative, he’s also a moderate. One of the most valuable parts of this chapter for me was the section on moderation. To me the exploration of the wisdom of moderation was unknown and it is a wonderful piece of work.

Moderation is a generally misunderstood virtue. It is important to start by saying what it is not. Moderation is not just finding the midpoint between two opposing poles and opportunistically planting yourself there. Neither is moderation bland equanimity. It’s not just having a temperate disposition that doesn’t contain rival passions or competing ideas.

The moderate can only hope to be disciplined enough to combine in one soul, as Max Weber put it, both warm passion and a cool sense of proportion. He aims to be passionate about his ends but deliberate about the proper means to realize them. The best moderate is blessed with a spirited soul and also the proper character to tame it. The best moderate is skeptical of zealotry because he is skeptical of himself. He distrusts passionate intensity and bold simplicity because he know that in politics the lows are lower than the highs are high— the damage leaders do when they get things wrong is greater than the benefits they create when they get things right. Therefore caution is the proper attitude, an awareness of the limits the foundation of wisdom.

There is lots of really good stuff in the section on moderation. Lots of wisdom.

Another major section of the chapter is on sin. As is generally true Brooks’ strength here is marshaling contemporary wisdom to illuminate the importance of keeping “sin” in our contemporary conversation. He is again, as I mentioned in the last chapter, hampered by the secular box within which he writes.

He nicely uses the morally and religiously disciplined world gone by of Ida Eisenhower which formed young Dwight to reveal the value of resisting sin in a disciplined and communal way.

In places like Abilene, Kansas, the big sins, left unchallenged, would have had very practical and disastrous effects. Sloth could lead to a failure of a farm; gluttony and inebriation to the destruction of a family; lust to the ruination of a young woman; vanity to excessive spending, debt, and bankruptcy.

In places like that, people had an awareness not only of sin but of the different kinds of sins and the different remedies for each. Some sins, such as anger and lust, are like wild beasts. They have to be fought through habits of restraint. Other sins, such as mockery and disrespect, are like stains. They can be expunged only by absolution, by apology, remorse, restitution, and cleansing. Still others, such as stealing, are like a debt. They can be rectified only by repaying what you owe to society. Sins such as adultery, bribery, and betrayal are more like treason than like crime; they damage the social order. Social harmony can be rewoven only by slowly recommitting to relationships and rebuilding trust. The sins of arrogance and pride arise from a perverse desire for status and superiority. The only remedy for them is to humble oneself before others.

Within the narrative of secularization there is an argument that while it may have been important to curtail passions in previous eras through sin as a social, moral construct, today our technical power over the world has afforded us the power to no longer be so strict or restrictive. Young Dwight can bloody his knuckles on the apple tree without fear of infection thanks to antibiotics. Past restrictions on sex were due to the possible life devastating consequences of unintended pregnancy. These have been relieved by birth control and even abortion as a fallback position. “Sin” was a useful concept in its day but since we have so much more power over nature today we should lighten up and enjoy life.

Brooks wants to re-animate “sin” and bring it back into our moral vocabulary as a tool for character building but the battle of the book is with the need for virtue and character today. In a sense the argument of the book is that we have overlooked and undervalued the eulogy virtues yet this Ike story illustrates how the eulogy virtues were set to serve Ike’s resume virtues. What if power and technology allow us to achieve the resume virtues while skipping the eulogy virtues all together? Ike had a mistress but had to keep it hush-hush. The ultimate contemporary power couple of Bill and Hillary seem to be able to transcend “sin” just fine once we got over the whole Monica thing.

Sin and the Secular Box

I listened carefully to his treatment of sin to hear (I was doing the audio book at first read) if he would piece the secular veil. No. The eulogy virtues are vital Brooks claims to allow the resume virtues to ascend without interruption. Recapturing a sense of “sin” is a helpful means to achieve character ends and avoid stumbling along the path to success.

Part of what is hinted at in his understanding of how sin plays in the old worldview of Ida and Ike’s Abilene Kansas is how sin threatens “shalom” because it rebels and violates a creator’s order for well-being. Sin isn’t just to be avoided because it hinders development and personal achievement, individual and communal effort should be paid to it because it breaks an order and a relationship. These are the deeply traditional (Christian and pagan) assumptions that nearly all non-secular societies assumed and what has been dismissed with celebration in the modern order. The subtraction narrative (again read Charles Taylor) assumes that our power and disenchantment has made sin as obsolete as an iron lung for polio victims.

This makes Brooks’ work kind of a throwback position. It is like deciding to be vegan not because the gods tell you not to eat your fellow animals, but because its good for the world and good for your body at an ecological and biological level.

Husband, Father of 5, Pastor
View all posts by PaulVK →
This entry was posted in book review and tagged David Brooks, The Road to Character. Bookmark the permalink.

1 Response to The Road to Character, Chapter 3, The Eisenhowers plus Sin and Moderation